Some months ago, I shared with my readers news about a scrupulously researched report, done by Regavim, on the issue of EU facilitation of building of illegal Bedouin settlements in Area C of Judea and Samaria.

(Area C is the region of Judea and Samaria designated by the Oslo Accords as being fully under Israeli control, with regard to both civil and security administration.  All Jewish communities beyond the Green Line are in Area C. Area A is fully under PA control, and Area B is under PA civil control and  Israeli security control.)

That full report can be found here:

Last Wednesday, Regavim ran a tour – in which I participated – to the Mt. Scopus area of eastern Jerusalem and from there into Area C beyond so that participants might see the situation for themselves.

This posting is devoted to the critical situation explored in that tour.

In 2009, Salam Fayyad, who was then prime minister of the Palestinian Authority, conceived a plan for establishing a Palestinian state without having to negotiate with Israel.

Part of this plan involves establishing facts on the ground in Area C, and into the eastern perimeter of the Jerusalem municipality, without Israel’s permission.

If this this PA effort – which has been ongoing – were to continue unabated, the result would be to:

[] create Arab contiguity with existing Arab neighborhoods such as Beit Hanina and Issawiya; 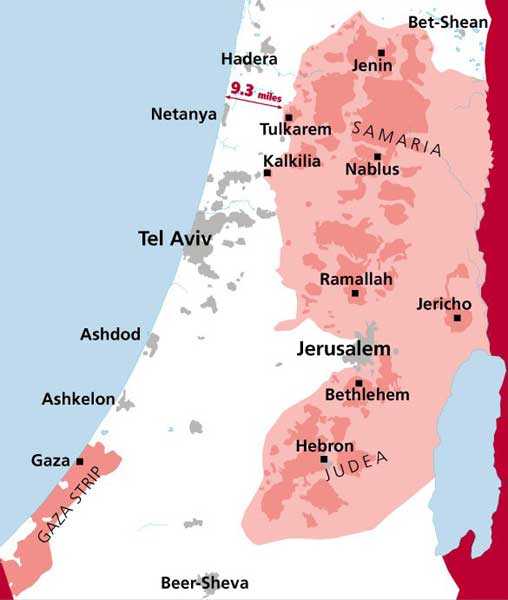 [] generate a disconnect between the Center of Israel and the Jordan Valley (along the Jordan River between the Kinneret and the Dead Sea); the Valley provides an effective security barrier against threats from the east;

[] interfere with the traffic on Route 1, a key transverse artery vital for the transport of equipment in an emergency.

The goal is to co-opt areas that belong to Israel a little at a time, via de facto annexation of parts of Area C.  In the process, contiguous Israeli areas would be isolated; most notably, Jerusalem would be cut off from areas to her east.

Area E1 is a region between Jerusalem and Ma’aleh Adumim, to the east.

For years, plans have been in place for Jewish construction in E1.  The building hasn’t happened, however, because of international pressure; the only thing there is a police station.  Today the entire Adumim region has become a major focus of the campaign originally initiated by Fayyad.

What the PA decided to do for this major undertaking was utilize (literally, make use of) Bedouin – moving them into Area C from Area A.

I was going to say the PA was doing this surreptitiously, but that is not the case.  Perhaps in the beginning it was surreptitious, but now it is very “in your face.”

Traditionally, the Bedouin are nomadic herders, living in temporarily constructed tents and moving about to search for water and grazing for their animals.

The picture below, from Regavim, shows permanent structures for the Bedouin in Area C, including a water tank and an outhouse.  (Apparently, outhouses were among the first structures to go up).

Two years ago, the European Union (the EU) became directly involved in this illegal process.  It is hardly a secret that the EU and its constituent nation-members lean politically towards the Palestinian Arabs, and establish policies favorable to them.  But the jump from calling Israel an occupier and claiming that “settlements” are illegal to actually supporting this building is qualitative, and significant.

In September 2012, the EU announced a decision to allocate 100 million Euros (roughly equivalent to the same amount in dollars) to the advancement of projects for Arabs in Area C.  Seven million Euros were earmarked for “development of land and basic infrastructures in Area C.”  Some of the remainder of the money is used for advocacy – defense in the courts, etc.

Similar sums have been forthcoming in the years since.  And, it should be noted, NGOs that receive funds from the EU are also involved, as are some individual European nations who are members of the EU – primarily Britain and Germany.

This is very clearly not about helping poor Bedouins.  The EU is not similarly assisting Bedouin in Area A.  Or in the Negev, or Jordan.  This is blatantly political. According to an EU document cited by Regavim:

There is a great deal that is wrong with this alarming situation.

First, it contravenes the Oslo Accords – Oslo II, the Interim Agreement, that established the areas of Judea and Samaria – to which the EU had formally served as witness.

That would be enough, but it goes beyond this.

The EU, as noted above, identifies Israel as the “occupier” of Judea and Samaria.  In point of fact, Israel is NOT an occupier (a subject I visit often and will come back to again soon).  Regavim notes in its report that the Levy Report determined that according to international law Israel cannot be an occupier.

But even if the EU position is accepted, there is a problem.  As Regavim explains (emphasis added):

“International law clearly states that the occupying power has lawful administrative authority within the occupied areas, while preserving, as far as possible, the laws in force in those areas.

The hypocrisy of the EU in this regard is breathtaking.  It is quick to point a finger at Israel, to charge her with violating international law, at the same time that it is in flagrant violation.

Area C is administered by the Civil Administration, which is an arm of the Ministry of Defense.  A number of regulations regarding building in Area C are in place, involving permits and more.  It is certainly not acceptable to simply come along and put up a building without official sanction.

And there is still more, for a good many of the structures that the EU has paid for have been erected on nature reserve land, which means even if permits had been applied for, they would never have been granted.  Water that was intended for the wildlife in these areas is being co-opted by the Bedouin.

Add to this environmental abuse, as raw sewage flows from structures the EU has built.

One of the things the EU has done when paying for Bedouin structures, is to have stickers placed on them announcing the EU involvement.  The sticker is a blue field with a circle of stars.

The fact that the EU is doing this – publicly announcing their participation in an illegal action – seems counter-intuitive at first.  But the EU assumption has been that identifying the structures this way provides diplomatic immunity – rendering Israel more reluctant to take them down.  After all, Israel wants trade agreements and more with the EU. Why tangle with it on this issue?

In the last two years, 700 EU structures have been built in Area C; 500 have stickers.

Any one of us – Israeli or tourist – who has traveled in the Judean desert over the years, has seen small enclaves of Bedouin tents.  They seemed rather harmless and pathetic.  But what is astounding is how these enclaves – now comprised of permanent buildings – have multiplied recently.  There are now 200 such enclaves in Area C, most constructed since the EU became involved.  At one point in the tour, we sat on the bus and passed by one after the other. There’s one, and then maybe 600 meters away, around a curve in the road, appears another. And then another, and another.

The video below, shot by Regavim via a drone, offers a glimpse of this situation:

How did this complex and horrendous situation evolve? And how can it be remedied?

As Meir Deutsch, a Regavim official, said on the tour, The system is broken.

When it comes to demolition of buildings in Judea and Samaria, or eviction of its residents, Begatz, the High Court, must hand down an order. However, the Court relies upon the government to provide information on the situation and make recommendations.  In this respect, the government has been remiss.

In 2012, the Court, with government consent, said that the Bedouin cannot be evicted from their homes until alternative homes are provided.  And indeed there are plans in place for the establishment of a new Bedouin town north of Jericho – Ramat Nueimah.  But those plans are not yet actualized. What is more, the Bedouin – provided with whatever inducements or facing whatever threats – are declaring they do not want to move. The longer they remain where they are, the more they become “facts on the ground.”

This situation must be publicized, and pressure must be brought to bear upon the government, so that it begins to establish tougher policies, and make stringent recommendations to the Court.  If that alternative housing is provided, and the Ministry of Defense acts, on orders from the government, then the illegal housing can and should be demolished.

Regavim – an NGO advocacy organization comprised primarily of lawyers – plans to be involved in petitions to the Court.  There are two potential factors here: Regavim can petition the Court to demand that the government be pushed to act appropriately, and it can make the case against the illegal housing in order to strengthen the government position. It will do PR to promote this matter, as well.

Ari Briggs, a spokesman for Regavim and Director of its International Department, is hopeful that the situation can ultimately be turned around.

I do not defend the government in this regard. Not at all. For it has not acted properly on behalf of Israel.

However, I want to note what I see as generating some of the reluctance to act.  It is not just the matter of taking a stand against the EU.  It is, also, I believe, a fear of negative publicity against Israel, at a time when Israel is so often delegitimized: “Look at these poor Bedouin,” the left wing will inevitably cry. “All they want are pathetically simple homes.  But Israel will not even permit this.”  Then we’ll hear that we are doing “ethnic cleansing.”  This is the pattern.

It is time to move beyond what is said about us, and to be strong enough to do what we need to do.  Lest we lose our land.

The act of preventing the construction of new homes is easier to achieve, especially now that Regavim is on the scene monitoring the situation.  If illegal building materials are seen being brought in, or construction is sighted, the Civil Administration can and often does act, if notified.

Regavim believes that many citizens of Europe – totally unaware of what is going on in Area C – might be exceedingly unhappy to learn how their tax money is being used. This is especially the case as what the EU is doing contravenes its own charter.

And so Regavim hopes to do publicity in Europe, as well as in Israel.  Additionally Regavim wants to see the Foreign Ministry file complaints against the EU.

Lastly, this summer Regavim will attend a meeting with the EU in Brussels, and hopes to bring the foreign minister along, as this will provide greater impact.

It is encouraging that Ari Briggs is communicating an optimistic perspective.

Regavim, however, does not operate in a vacuum: Please, do your part by sharing this posting and publicizing this information broadly wherever you can!